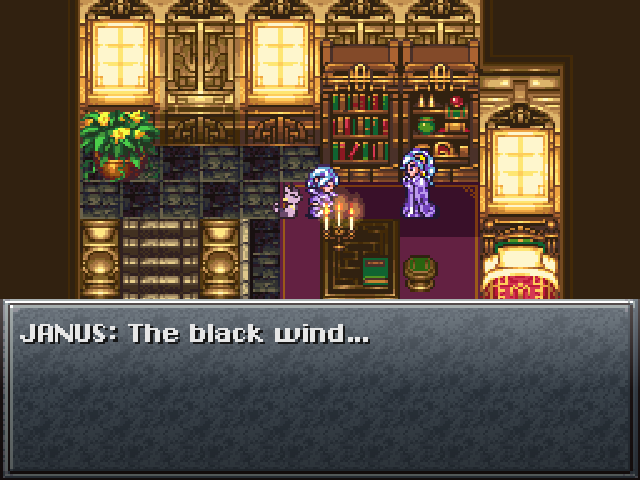 The DS version of Chrono Trigger is a pretty good upgrade. It polishes up and uncensors the text because it has more space to do so, puts in some neat extras, and even throws in the PS1 edition’s spectacular FMVs without the previous port’s loading times. Extras include a monster raising/battling minigame, a few extra quests, a bestiary, and a new ending that ties in to Chrono Cross. There are two reasons why there are some naysayers to this edition however: some disagree with Frog being changed from Ye Olde English to just formal speech as to them it removes some charm (my honest personal opinion: I see the point, but I like the DS version better as no one in the Middle Ages talks in Ye Olde anyway), and the new ending appears to be pretty tacked-on. The latter however is completely optional. All in all this is a terrific version of one of the most celebrated JRPGs for players both old and new.

Translation Description. The Nintendo DS port of Chrono Trigger was successfully translated back in 2009. Spanish RPG fans felt deceived after Square-Enix decided not to release an official Spanish translation of the game in Spain, thus rendering this patch widely received by the Spanish romhacking community. Chrono Trigger would not officially have an Spanish translation until it was ported to Android and iOS devices.

The patch has been uploaded to RHDN for conservation purposes only. Cheats originally included have been removed.

If you need them, please check an updated cheat database. ROM / ISO Information.

This is an updated version of that fixes many issues and further localizes the text, with the final product hopefully being something closer in quality to an official translation. Aside from cases where the new translation offered some new meaning, most enemy/tech/item names were changed back to their DS/SNES counterparts with the DS translation usually taking preference when the 10-11 spaces available for names would allow it. Except for using “PlatinHelm/PlatinVest” for Platinum Helm & Platinum Vest, any kind of abbreviation was avoided. Anything that makes a large appearance in the script like Grandleon, Bosch, Sara, etc. Was left as it was just because of the work that would be required to change them all back. You can expect to see many of the things you might have found missing from the original SNES translation like Gato’s metal joints, the Enertron’s “But you’re still hungry.”, and some of Magus’s coolguy lines just as a few examples.

As a little bonus, this also incorporates the same changes as the, so Frog has more of a use at the end of the game, and I’ve also made it so that Nu Spekkio can be fought anytime after level 50 instead of having to be at level 99. If you don’t like these extra changes and want a version without them, or if you have any other problems, feel free to send me a message about it.